Fuck the slice, I want the Pie

Posted by Elisabeth Ouni on Apr 6, 2009 in Stories, Uncategorized | No Comments
Warning: Trying to access array offset on value of type null in /customers/9/d/f/apolaroidstory.com/httpd.www/wp-content/themes/inkthemetrust/single.php on line 47

Can you have your cake and eat it too? I always try too. I always lose.

When I found out that Grandmaster Flash and Xzibit were both in Belgium on the same Friday night in two different cities, deep inside I already knew I was doomed. To choose is to lose and I hate losing so I went for both. These are the bare necessities you need to know:

Grandmaster Flash was playing in Leuven possible starting from 21H00.
Xzibit was booked to perform in a club in St-Niklaas around 02H00.
I live in Ostend but work in Brussels. Yup.
Due to ‘unexpected circumstances’ I had to stay in Brussels Thursday night. This meant that when I arrived at my work on Friday I realized I did not have my precious Polaroid with me. Basically this meant I had to return home to Ostend after work.

Now, some other thing you have to know. I don’t have a car. Nope. Me and Public Transport, we are friends since waaaay back. Sure it’s a love/hate relationship, but in times of need, PT was always there for me. But blog-wise, the fact that I don’t have a car was a serious problem, since I had to figure out a way to go from Leuven to St-Niklaas in the middle of the night. I asked around and I quickly found a trooper who agreed on being on stand-by, picking us (Jules and me) up in Antwerp and driving us to St-Niklaas. To visualize the distance,a little map: 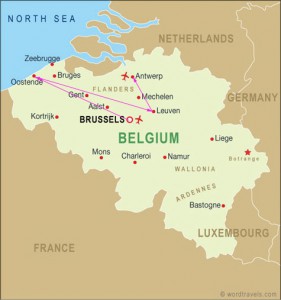 You all realize this is nuts right?

So since I had 4 hours of PT solitude I started thinking about the two artist. I decided for myself that Grand Master Flash was my chocolate pie and Xzibit was the icing on my cake. I was curious about Grandmaster Flash. After 20 years he is back with a new album called THE BRIDGE with a lot of hiphop’s A-lister collaborations.

Grandmaster is considered to be one of hiphop’s founding fathers and claims to be the first to what initially was called ‘cutting’ and is now known as ‘scratching’. In his own words: The first DJ to make the turnable and instrument. There is an ancient discussion about Kool Herc being the first to actually touch the records and move them back and forth and clockwise, but Grandmaster Flash believes he was the first to use this technique. There is no doubt that Grandmaster is your DJ’s DJ. He started the whole hip hop movement in The Bronx, scored a global hit with ‘The Message’ and is the reason why we are all familiar with concepts like MC-ing and freestyle battles.

A big misconception about Grandmaster Flash: he is not the one rhyming on the platinum sold ‘The Message’ song although he is credited on records. If you don’t hear a scratch, Grandmaster is not on it.

Anyhow, I arrived pretty late in Leuven. When I entered, the (sold out) venue was already packed, but my PIC and some friends were already front row waiting for me. Approximately fifteen minutes after my arrival, Grandmaster Flash came on stage. He didn’t wait long to put the fire in the venue and I found myself jumping, dancing and sweating already ten minutes later. There were visuals behind him that moved in sync with him spinning his records and showed a small biography. I had fun, although I have to be a bit honest by telling you guys that I was surpised by the set he played. I imagined him playing more oldskool stuff so I was surprised to hear a nirvana-blur-white stripes mash-up that we hear so often nowadays. But hey…

Now, as quickly as he came up, as fast was he gone. He greeted the audience and that was that. He didn’t return neither, like other artists do, but he was a DJ so that might be different. Or not. He was always focused on spinning his records so there was absolutely no eye contact. His entourage was just one guy with big corn rolls. I started to get nervous since things didn’t feel right. The guy was still hanging around on stage, packing Grandmaster’s stuff. He didn’t look up so it took me three empty water bottles that I rolled on stage to get his attention. When he finally looked up, he approached me.

I explained him the project and although he was very friendly he immediately told me it was impossible to take a picture from Grandmaster since he was already gone. I had my doubts about that one. Since when do artists leave without the entourage? I mean, ofcourse it was possible, but still… My head started spinning. Normally I would try harder, push harder, hustle harder, but I didn’t want to miss a possible ride to Xzibit
neither. So I asked a last time and the man told me I had to visit http://www.grandmasterflash.com and send an official email with my request. I laughed and said: “So, If I send an email, somebody will respond, and next time you see me I càn take a picture?” “Sure,” he answered me, “we will be back soon to promote the album”. Was he for real or not? I had no time to doubt him, so I thanked him for his advice and left the venue. Jules was still discussing with him, still trying to get her way in, but if you have to discuss or negotiate too long with entourage, I knew we wouldn’t get in unless we sneak in. (Read Diane, Diane, Die-An) But unfortunately we didn’t have time for that.

So we left the venue, focused on getting to St-Niklaas. By the time we got to Antwerp, my standby ride still didn’t reply. I didn’t have a plan C, so basically that meant that we were fucked. No ride to St-Niklaas. No Xzibit.

I wanted it all, and I ended up with nothing. Now isn’t that…ironic. I decided to buy a car. I told you it doesn’t get any easier.