The one with the rapper and the booty.

Posted by Elisabeth Ouni on Aug 9, 2009 in Stories, Uncategorized | One Comment 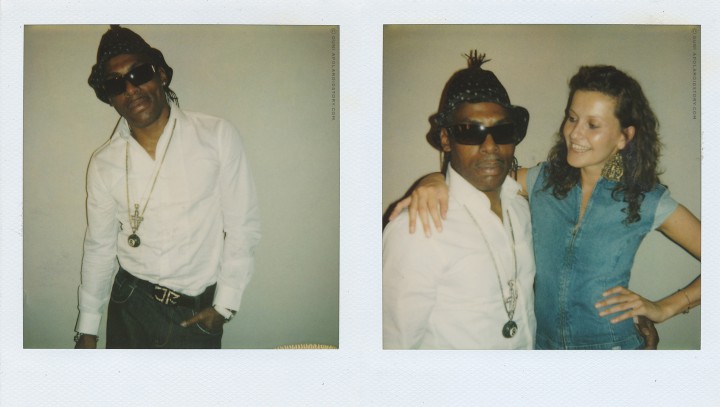 What’s wrong with this picture? That’s right. I’m on it.

Here is the story:

I love bikini girls. I love bikini magazines. I love swimwear shoots. I do. That might sound odd  for some of you, but, I just love the image of a perfect curved body on a lonesome beach. Trying to capture the perfect image, the perfect illusion of ultimate fake. Selling the fantasy.

I’m a HUGE Sports Illustrated fan and every year I check the images and I sigh..dreaming of a cover that I’ll probably never have. (Anna Beatriz Barros is my ultimate Sports Illustrated model, for the one’s that want to know) So, when I heard that COOLIO was booked to perform at P MAGAZINE’s SWIMWEAR EDITION launch in Club Carré I was trilled. Duhu…! What a combination!

Coolio, the gangsta rapper that dissappeared from planet earth performing in a club where the most luscious, beautiful and sexy women gather together to show off the sexy pictures taken from them on a bounty white sandbeach in Thailand. Me and Jules, we were SO down, like you would not even believe it. Since this is a very visual story I decided to post some pictures. I want you guys to feel the sexyness of that night.

When Jules and I arrived the red carpet was rolled out ready for the hot models and celebrities to pop out and show off their fabulousness. (Is this even a real word?) Of course  they had an aquarium with bikini girls, swimming like mermaids waiting for their Poseidon to take them to the deepest depts of the ocean. 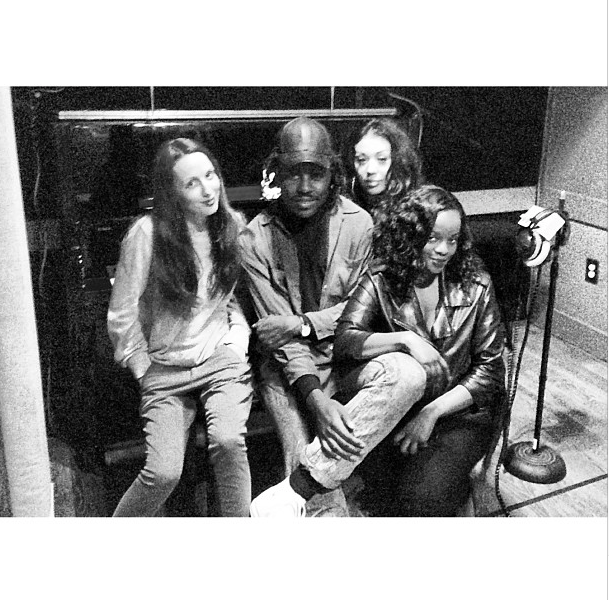 Which explains all the men waiting and hesitating to go in. Why go inside, if the action is outside?

This hustle to get the Polaroid was as fluent as a little boat cruising on the Turkish rivièra. I met the manager on a professional base a while ago and since we both had a very efficient and succesfull collaboration together I was in the position to ask him this favor. True, he didn’t agree instantly, but after a little push in the back from a mutual connection, he agreed to help me out, without giving me any promises.

How is Coolio doing? Where is Coolio hanging out? It’s like he disappeared from the univers all of a sudden… Coolio’s career is marked with ups and downs, comebacks and disappearing acts ànd it is known that he is a familiar face to the hand of the law. But, me personally, I always liked Coolio. Ok, I don’t know his album by heart, but he had some ok songs and you can think of him  all you want, but you do have to recognize that ‘Gangsta’s Paradise’ gave you goosebumps the first time you heard it.

I was still a little girl when that song came out to score the ‘Dangerous Minds’ film. Wow. I was impressed. My fellow students never even heard of guns, sex, teenage mothers, gang wars and working shifts at the grocery store to make a living…? Their biggest worry was the French test tomorrow and the Grease dance for the annual high school showcase. And come on, that video is a classic! Michelle Pfeiffer in the shiny leather jacket, Coolio, the chair , the smoke and the two of them staring in each others eyes? Brilliant!

Again I wondered, how it must be, to be Coolio. After winning Grammys, world fame and a few hits here and there he somehow never managed to make a full success album again. I guess it’s true when they say, that when you’re born in Compton, the streets are never far away. Drugs and felonies have always been a part of his live and derailed him in his way to be constantly present in the music industry. And now he was here performing in a club for a swimwear edition-launch party  for a men’s magazine in a notorious club. In Belgium. How fucking weird is that?

So while Jules and I where waiting for the manager to help us out we decided to portrait the night. Like a real men’s magazine party should be, the eye candy lived up to every ones expectation. There were: 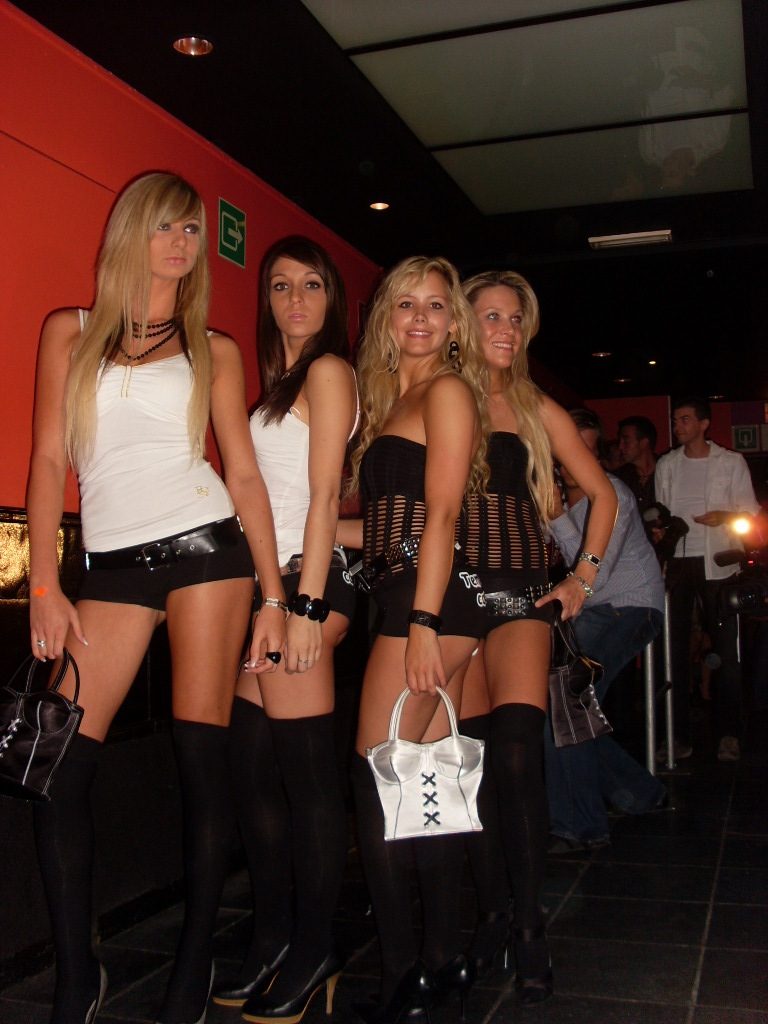 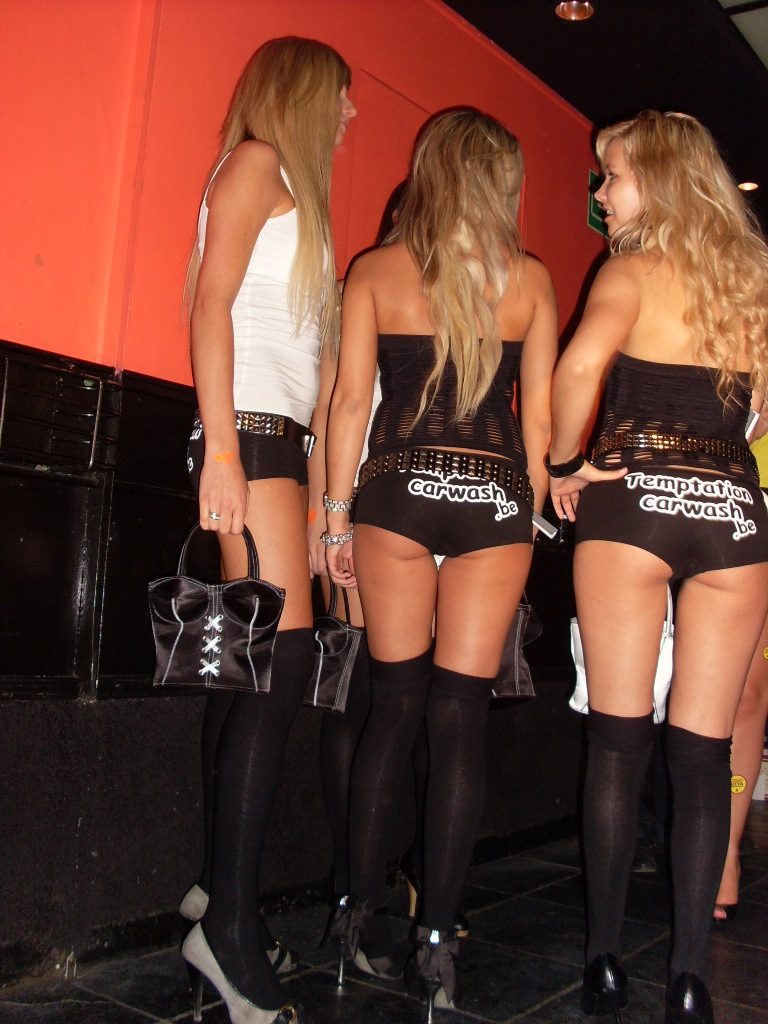 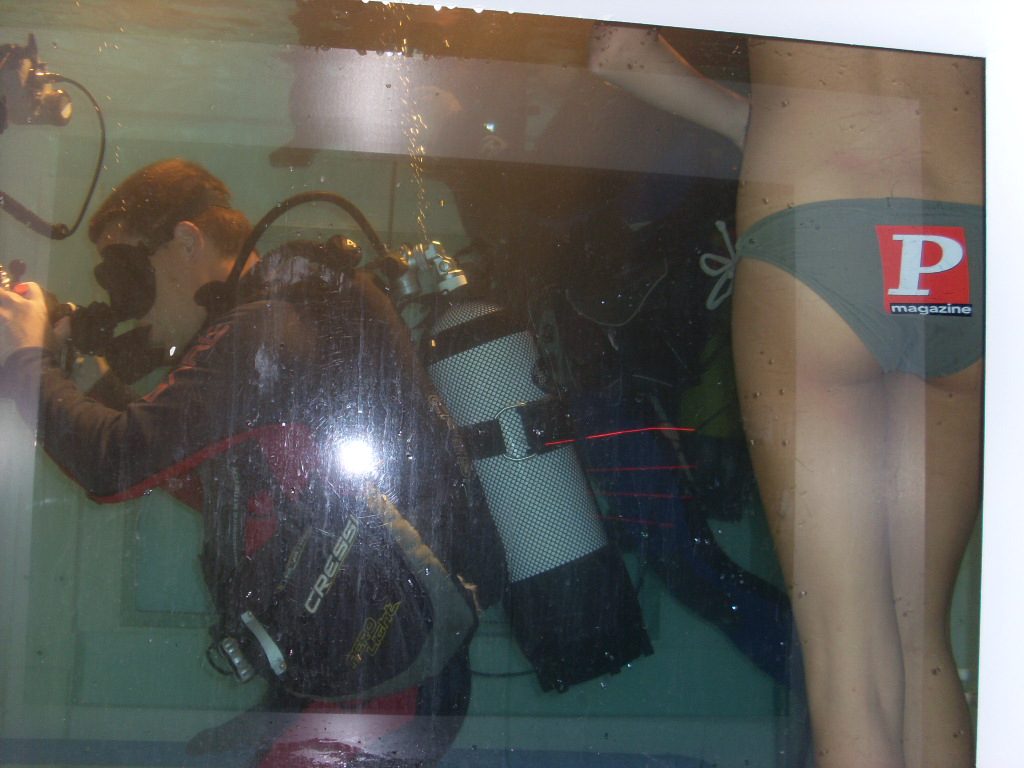 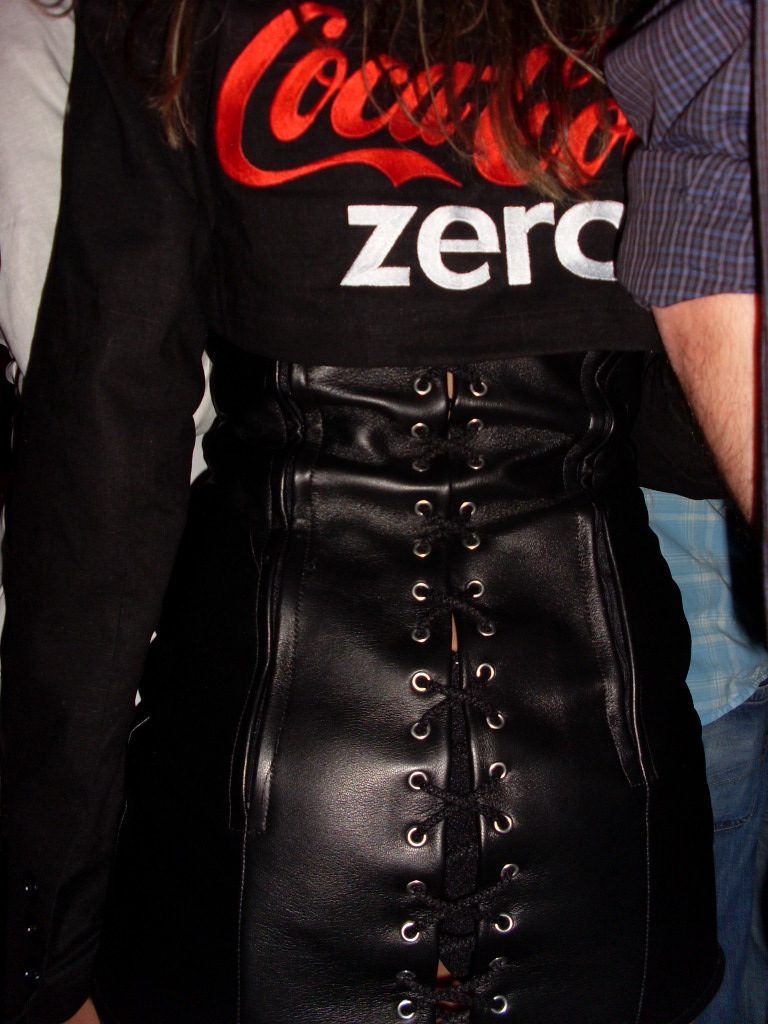 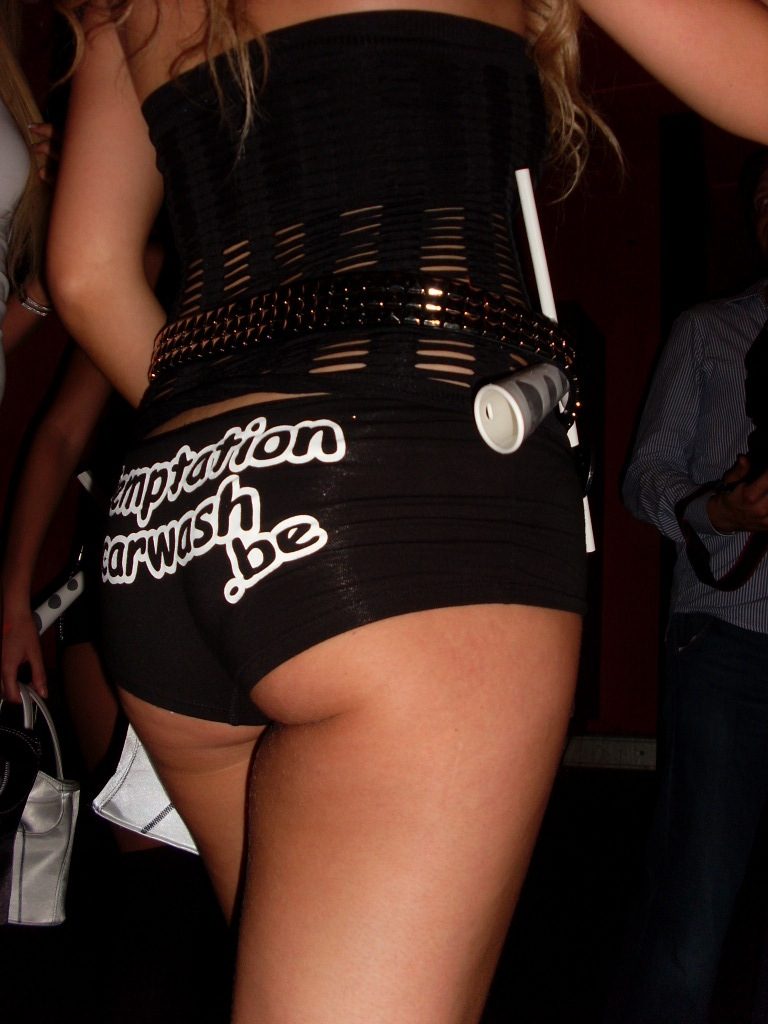 Miss Belgium (Booty or Beauty, how you want it?) 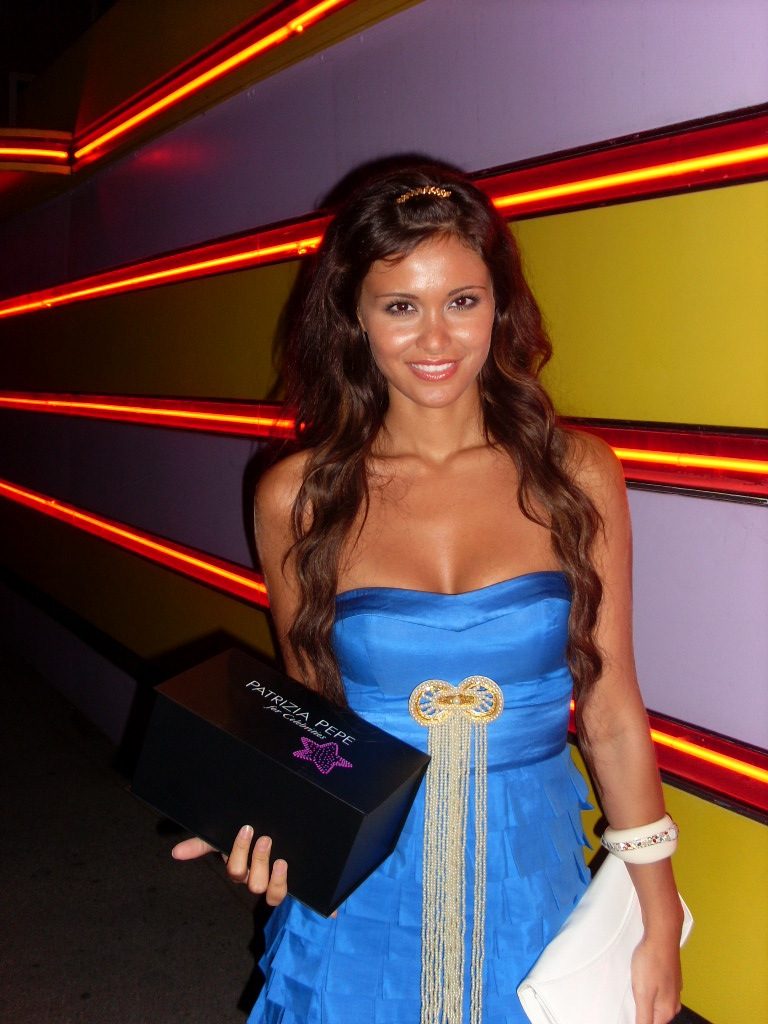 and just us kicking ASS 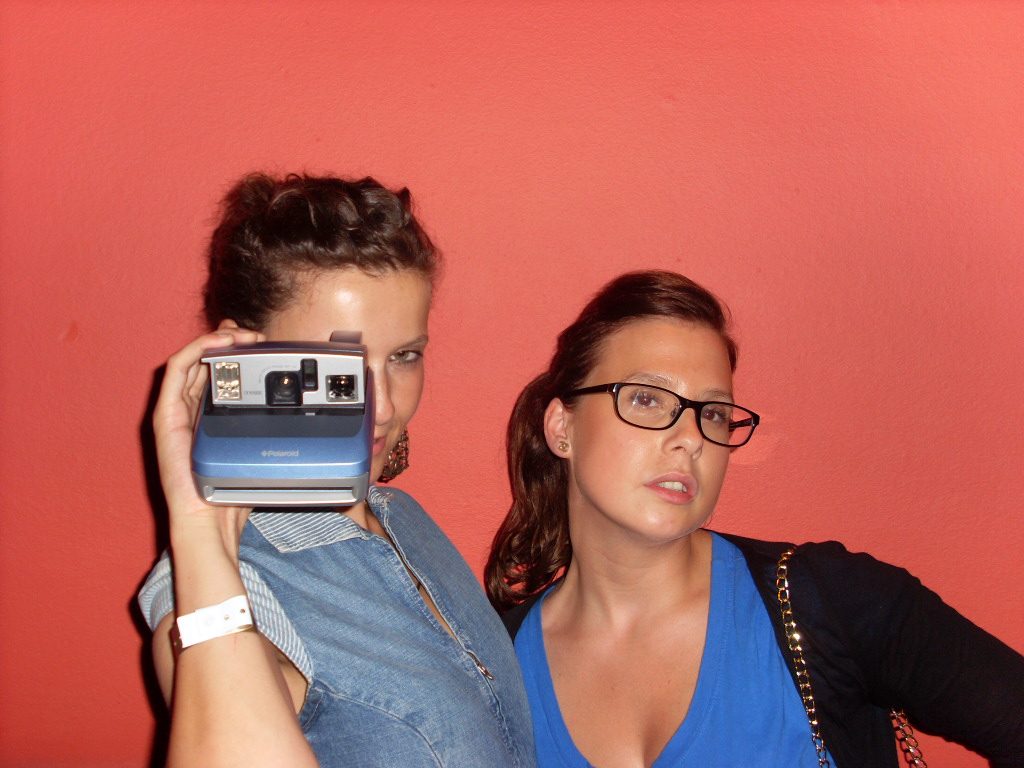 The manager of Club Carré is a man of his word. He was polite, and a (very busy) gentleman. So when he asked to come and follow him ‘RIGHT NOW’ we listened and followed him in the deep dark backstage tunnels of Club Carré. Oh..How I wish those walls could speak and tell me all about  the sexy dramatic stories that might have  happened there… Before he opened the door from Coolio’s backstage lounge, he told me very severe: “You get 5 minutes, that’s it!’ And off he went. I opened the door. My eyes fell on a not so tall man with sunglasses. I walked straight up to him and introduced me. I noticed he was accompanied by only one guy. The room was packed with people, and I felt my cheeks turning red and me sweating like a horse in that jeans jumpsuit I could barely breath in. (I just never get used to this.) He listened to my story and was happy to help me out with a picture:  (mind the booty) 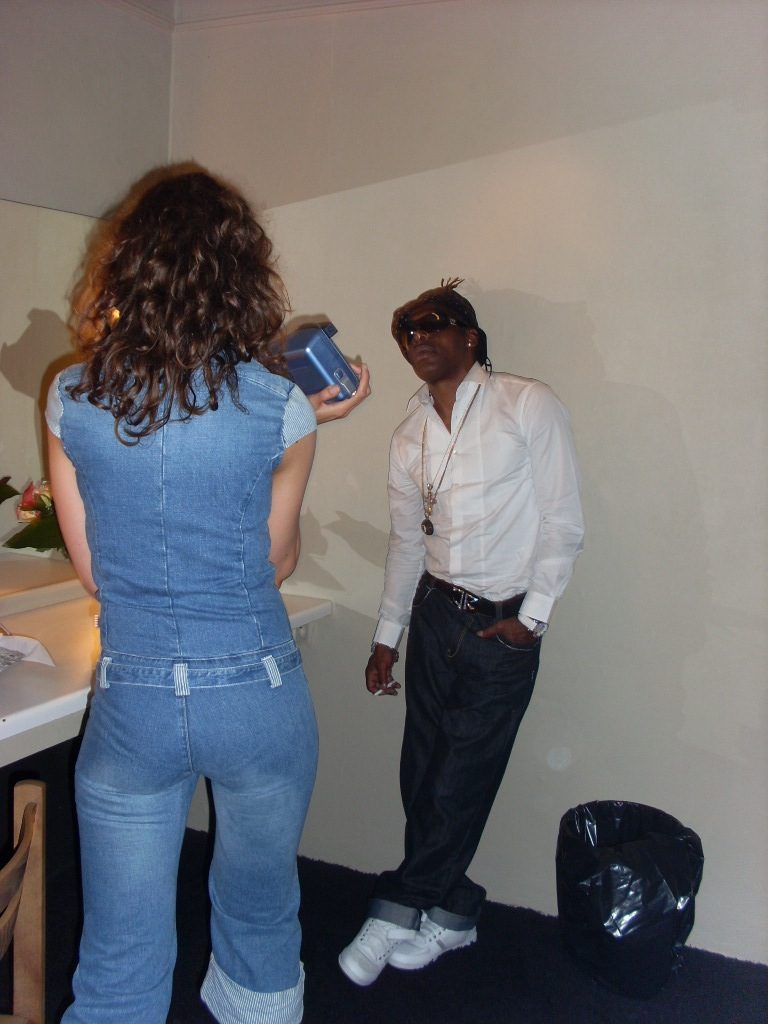 While I was waiting for the picture to come out, the manager knocked on the door, asking me to please leave the backstage lounge. Coolio said: “What, what is he saying? You have to leave?! No,no, don’t go. I like her!” The manager replied: ‘Oh…so you don’t mind she hangs around..?’ Coolio: “Man, are you kidding me…?!” The manager winked at me and said: “I leave you two then.” Hmm…what just happened here? Was I missing something? Fine by me, I needed another picture so I was happy to stay. I noticed Jules in a corner chatting with the entourage guy and giving him props for his outfit that night. That’s my girl. 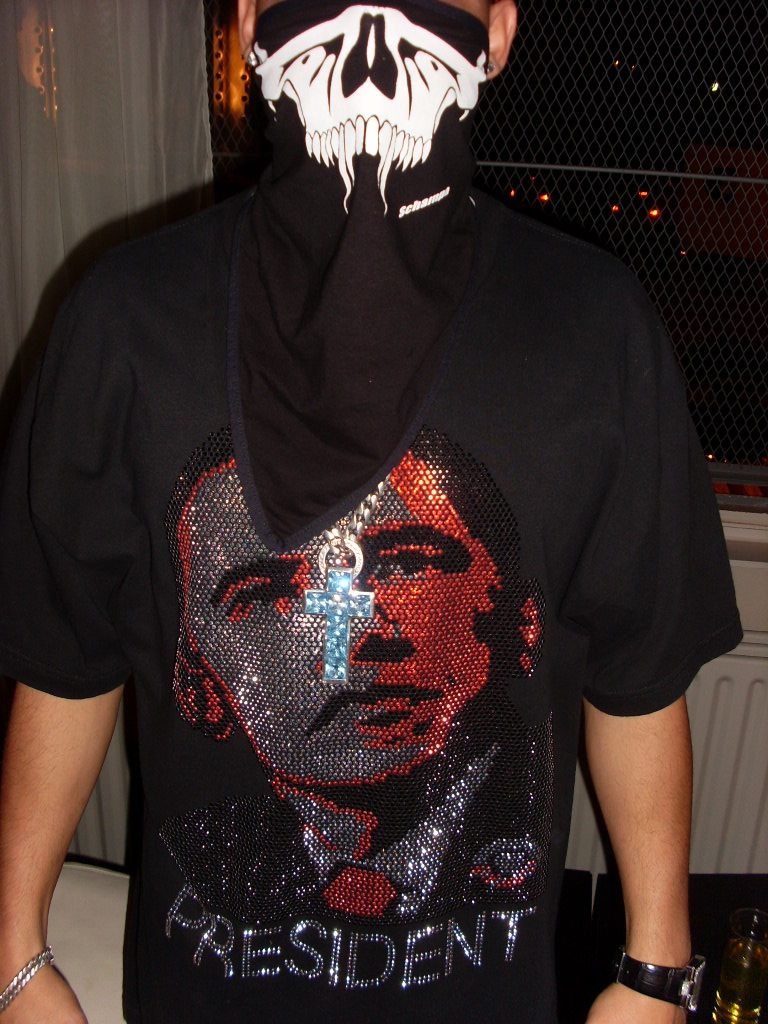 I, however, needed another picture, since I wasn’t very happy with the one I had. I managed to find a new Polaroid camera since my other two that I bought almost a year ago in a secondhand store were losing their ‘finesse’ to make sharp pictures. This one was one of the last issues Polaroid released before closing down all production and clearly the distance of the subject was much further than I wanted it to be. But, I also wanted to talk to him. He was intriguing. His story, his career, and I had a lot of questions for him, and I felt that he would answer them. It is so hard to have a nice conversation with an artist, since you don’t know each other and you have to find  a mutual interest in one another to actually have a conversation. Usually there is no time to even speak three words let alone a sentence and since the Polaroid is the most essential I never have the chance to interact with the person behind the music.

So while I was trying to set this conversation in the right direction, he came closer and whispered something in my ear. Of course, I was surprised, he took me off guard and I couldn’t really understand what he was trying to say, so I asked him to repeat what he was whispering.

At that time everybody in that room was looking at us. I felt the jumpsuit sticking to my body, another heat flash on its way. “Do you – blablabla – black – blablablabla- ” Coolio asked me. The whole room was looking at me. Jules looking at me, concerned. I had to be careful, I mean, I still needed another picture and sometimes saying something wrong can change the whole atmosphere and state of mind of the artist and you can get kicked out in no time. The thing is, I could really not understand what he was saying… and I was too shy to ask him to repeat it a third time…

I just added the way he was looking at me, with the whispering and his presence being very close in my neck area and came to a certain conclusion, and so I replied: “Oh…(laughing nervously), I don’t know, I’m a very good girl, and you know how good girls act, so uhm.. (coughing nervously) I wouldn’t know.”

Coolio looked at me like I complètely lost my mind. “What did you think I was saying!!” he asked me totally surprised, drawing the attention of the entire room towards little miss me. I wanted to crawl under the fancy carpet, hide behind the curtains or jump out of that window. “Uhm..do we really have to discuss this is…out loud…?” I nervously replied with a joker-smile. “But what did you think I was saying, I just want to know if you would date black men.”

Now, let me tell you something. Maybe it was me and my dirty mind, but I understood something -slightly- different, which might happen, of course, but I was feeling so….embarrassed, my god, you cannot even realise the level of embarrassment I was in. Dating, he said. Date. “OF COURSE!! Òfcoùrse I would -date- black men. I did, I have, I had, I could!  Why wouldn’t I?” He started laughing. “Relax, kiddo, I was just teasing you, you’re funny, let’s talk.” “HAHAHAHA, of course, how fùnnyyy!” I said, cursing myself inside for deciding to wear the damn jumpsuit since clearly, it was blocking all the oxygen circulation to my brain  and I wasn’t able to understand proper English anymore.

So while we had a small conversation about the music industry, a possible new album, other artists, his ex-girlfriend, his house in Vegas with a golf course and other random stuff we were constantly interrupted by different media, and  Miss Belgium, Miss Flower, Miss Strawberry and many more, asking for a picture. He was very cooperative and did what people expected from him.

Things were a bit awkward when the manager sticked his head through the door and announced that he had a last minute surprise for Coolio. The door opened and 15 bikini girls entered the room. Meat on a silver platter. Coolio looked at me, sighed and said: “What the hell…?” He greeted the ladies who all gave him a kiss, and posed for the picture with 15 bikini girls. Yup. 15 bikini girls. (or at least à lot) When they left, he came back sitting next to me and softly said, so no one could hear: “You know, I don’t even like this shit, but you know how it goes….”

The club was packed, it was getting late and it was time for Coolio to get on stage. He said:”You can have your final picture, but I want you to be on it. It was thàt, or nothing. So I agreed. (What could I do!!) When he reached the door from the lounge,  he turned around and asked: “Will you still be here after the show..? Would be nice if we could talk some more, you know.” I said  that I had to work the next day, and that I needed my 8 hours of sleep and finished with: “I see you when you get there.” right?! He smiled , and continued his walk to the stage where the audience was impatiently waiting for him.

Jules and I watched his grand entrance in the main room of the club, the public yelling enthusiastically , camera’s ready to capture the ‘gangsta’ rapper. Will he ever be able to make a comeback in a music industry that changed so much since he started in it? An industry he doesn’t really like anymore, since he doesn’t like the direction hip hop is going these days…? Only time shall tell how Coolio will be remembered in the archives of hip hop history.