Posted by Elisabeth Ouni on Apr 20, 2010 in Stories, Uncategorized | 5 Comments 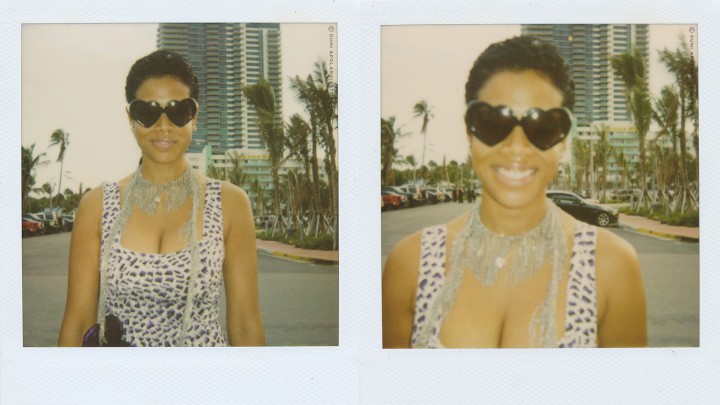 If you are not familiar with the gorgeous, bootylicious, dazzling individual nicely polarized above… then I guess you’re just not that into Milkshake.

You might Trick her once, but she Caught your cheating ass out there , in the meantime she brings back all the boys to the yard, providing them with that good stuff, while  she is living the life of a Millionaire , because at the end, she got the money. You might Keep it down, ’cause word is she can be Bossy, but at least she got the balls to bring it to you Accappella, Blindfolded and in Public if necessary.

A Polaroid Story is very proud to hand over the 5th woman featured on my little blog.

I told you I was aiming for more ladies in 2010. I have always loved Kelis, from the day she started out as a N.E.R.D. protégé. I love her solo efforts as well ànd her different guest features with the likes of  ODB, Busta Rhymes, Richard X, the late GURU, and many more….

After delivering a child in this ashy volcanic world, separating from an Illmatic husband, (let’s not go there shall we…?) and a different hair-do, she is now back in business with her fourth album, FLESH TONE, where she is clearly heading towards a more DANCE direction with the help from her new label boss Will.i.Am, David Guetta, Diplo and many more. Wether you like this new direction or not, is not important for now. Let’s concentrate on the story. Here we go.

For the ones that just tune in, I was in Miami a while back during WMC. The WMC focus is mainly on DJ’s but if you’re lucky you might catch a few artist here and there that you like. While I was researching for interesting gigs I noticed on Kelis’ Twitter that she had different performances planned during her stay in Miami. Since I had a tight schedule myself it quickly turned out that I was only available for 1 gig that was planned in The W Hotel hosted by BELVEDERE VODKA. and -horror o horror- PRIVATE. How on éarth was I going to pull this one off…..? Expensive Hotel. (Yes, yet anòther one that is too expensive for you, me and the rest of the world, it’s not my fault.) Expensive Vodka (Don’t know ’bout you, but i rather spend XX €’s on shoes than on booze) PRIVATE (not allowed for ordinary individuals, like um… ME.) I started to think…(hard)

From time to time (read seasonal) I go out in a little city by the sea in Belgium called KNOKKE in a tiny little club called KITSCH. Knokke is basically a Belgian version of Saint-Tropez, Monaco or The Hamptons . It’s very ‘posh’. I mean…the city even has its own Louis Vuitton bag and all. Point taken? Anyhow, Kitsch club recently trew a party in honor of BELVEDERE since they are the first flagship store/club in the BENELUX providing customers with the lavish and decadent XXL vodka bottles. So, I asked my longtime favorite DJ and notorious troublemaker TLP who was also hanging out in Miami, if he could help me out, being connected as he is,  and he came back with the happy announcement that the Kitsch club owner was ìn Miami ànd that the man was doing his best via transatlantic calls to get us in. Sing Halleluja! The next day, I had the confirmation that we would be on the list. Abracadabra Open Sesame! The Belvedere party was during the afternoon at The W Hotel, so I was glad it wasn’t an extremely hot and sunny day because that saved me a day on the beach +  the combination of vodka and too much sun might turn out catastrophic.

When we arrived at the hotel we immediately were provided with -of course- Belvedere cocktails. Afternoon drinking. Dangerous. Especially if you have to wait. So that’s what I did. Looked around. Sat around. Talked around. Sipped around. Very dangerous the whole free-booze-on-Polaroid-hunting-events, I must say. That is normally néver the case, so it’s hard not to get seduced by fresh tasting cocktails…. Anyhow… Turned out that Mad Decent King and Major Lazor DJ DIPLO were playing right before Kelis so I had the privilege to see Diplo aka real name Thomas Wesley Pentz  for the first time in my life, while spinning some tunes in a garden. Quite the change in comparison with dark sweaty clubcorners… 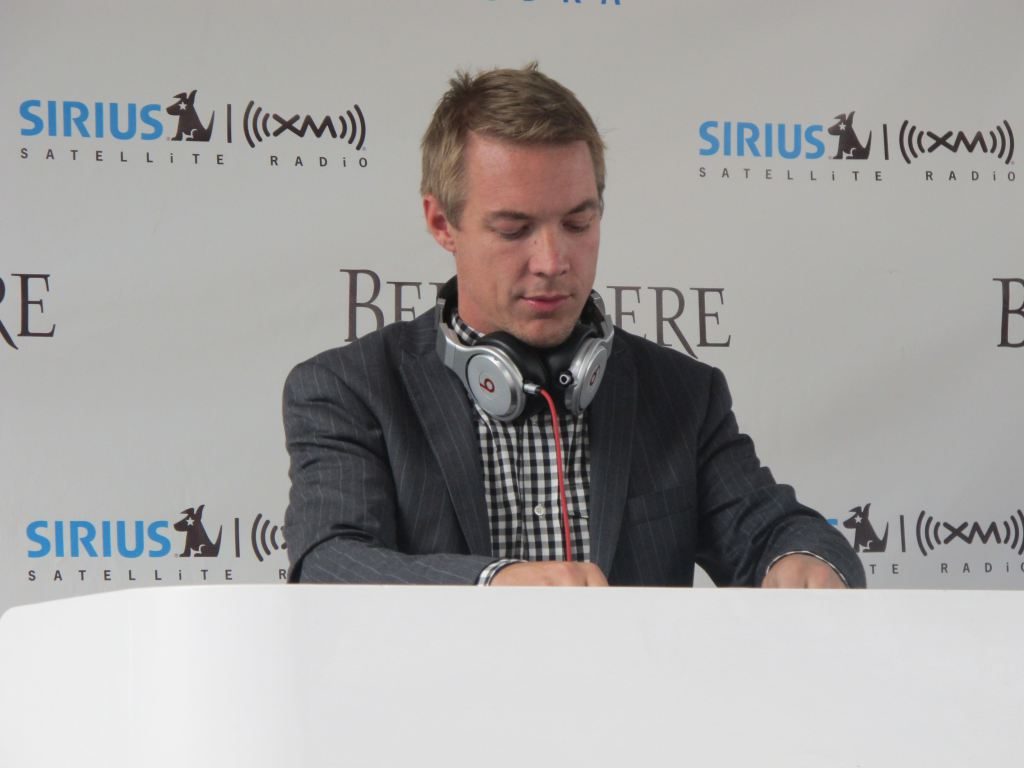 If you notice that Diplo has a bit of an annoyed facial expression that might be due to the  soundsystem that simply was not doing him any justice. Since he was playing in a garden, somebody decided that the sound should be finetuned to the surroundings. Nice and quiet. Again. Quite the change in comparison with loud pounding club speakers.

When I noticed the lovely presence of DJ RASHIDA entering the little stage I knew Diplo was finishing his set and Kelis was about to turn up any minute now, since she is accompanying Kelis throughout her promo tour for the new FLESH TONE album. 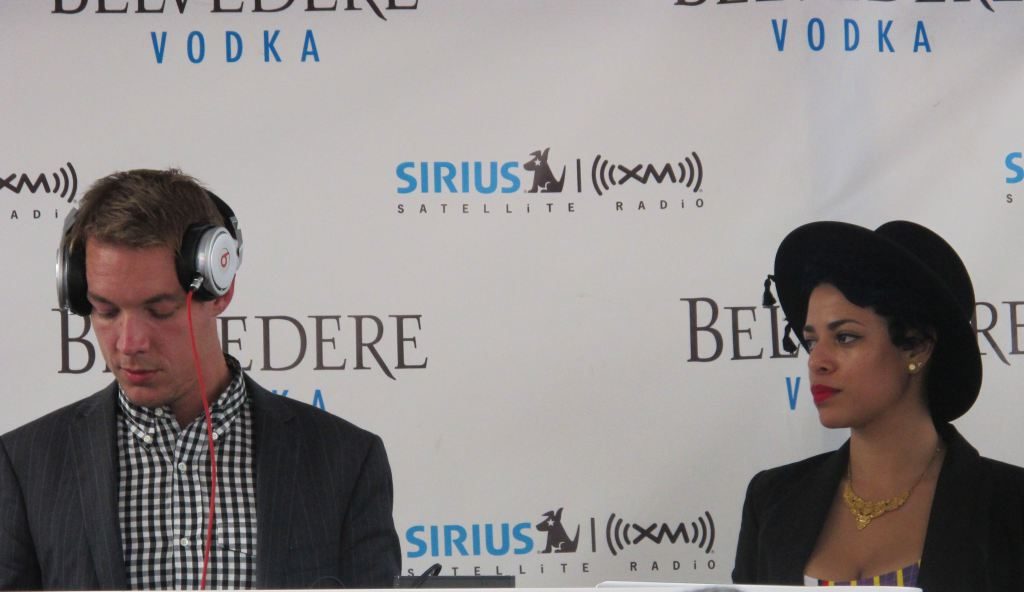 Ok. Now I had to work double shifts. I was aiming for a Diplo Polaroid aswell, (what did you expect, it’s DIPLO!!)  so while he was heading out, making his way out of the garden, I was waiting politely at the end of the garden to ask him for a Polaroid. When he finally arrived right in front of me, his publicist/manager was tired of all the huss & fuss and I was getting the big no-no for my little Polaroid request. I was still explaining my blog, while he was dragging his stuff along when Kelis passed us by kissing Diplo hello. #surrealsituation

Well, what do we have here…, my other subject just walked by! Diplo told me he réally had to go, and suggested me I should come to another party he was playing downtown Miami, where he would have more time for a Polaroid, so  after a final evil look from his publicist/manager/something else, I let him go. You can’t have em all.  Well.. at least not at once. 😉

Back to my main subject.

The fact that she was entering the garden and went stràight on stage, made me think that when she was done with her performance she will probably do the exact same thing and would leave the gig immediately. Especially since I knew she had 2 performances lined up that day. (research people, research.) So I decided to ask her publicist/manager/something else first and explain the project/blog to raise my chances of a Polaroid.

After the little performance Kelis took some time to take some pictures but it was very crowded, she was surrounded and I don’t like to ask for a Polaroid in those kind of circumstances. I need the artist to really pose alone,  and with a billion people surrounding her, that is simply not possible. I introduced myself to her publicist, explained the project and she gave me an OK and suggested that I should ask the picture rìght before they were leaving the hotel.

Ok. Half of the job done, so with my Polaroid camera ready I was standing by the exit way of the garden, the same exit Diplo took to leave the party. Unfortunately, to my HORROR, the group of girls left wìth Kelis, the exact opposite side and went for another exit!! I pulled my friend BOO’s arm in a panic and yelled: ‘My god, they are taking another exit, we have to run.” This is the interesting part. You have to walk behind an individual you don’t know, without scaring them and without appearing too suspicious. Very inspector Clouseau. I was hoping the publicist would feel some eyes in her back, turn around, recognize me and remember my request so I could stop chasing the woman across the giant pool they were walking by, but she didn’t. God. I hàte doing this.

They were already on the parking lot before I had the balls to run a bit faster and tick the publicist on the shoulder because the group was only minutes away of hopping in a car. The girl turned around, remembered me and immediately said: “I’m sorry, but it’s not possible anymore to take a picture.” The whole group of girls turned around with Kelis on top and looked at me. Surprised. 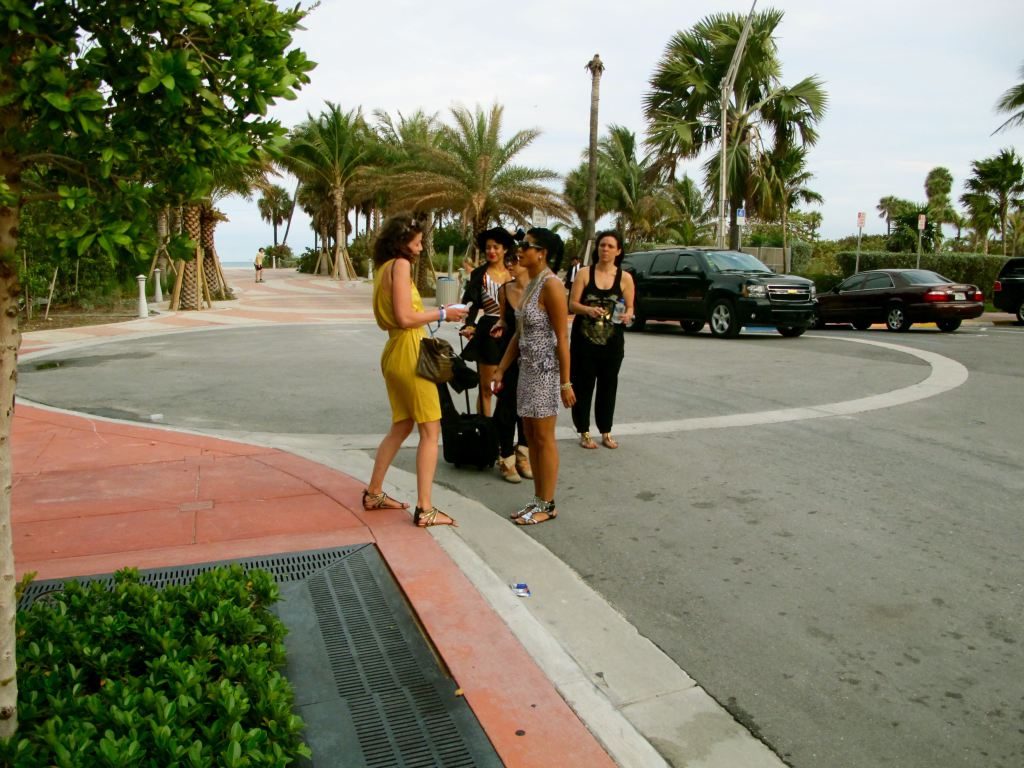 I wasn’t feeling like begging for a Polaroid in front of a group of girls so I just said: “That’s ok, if you don’t want to take a picture, then so be it.” Kelis looked at me, smiled and said: “I réally like your earrings, they are beautiful.” SCORE! First EVE with my obnoxious golden Top shop Versace-esk Lions and now with my  3€  golden  Scarabées. *Bling Ca-Tching*

She said: “Let’s take the picture, shall we?” I was so happy with that, as you all might believe… I asked her if she was willing to go to a nearby wall (you know me….) but she said: “If you want your picture, you’ll have to do right here girl.” Her wish. My command. I aimed my Polaroid and did my countdown: 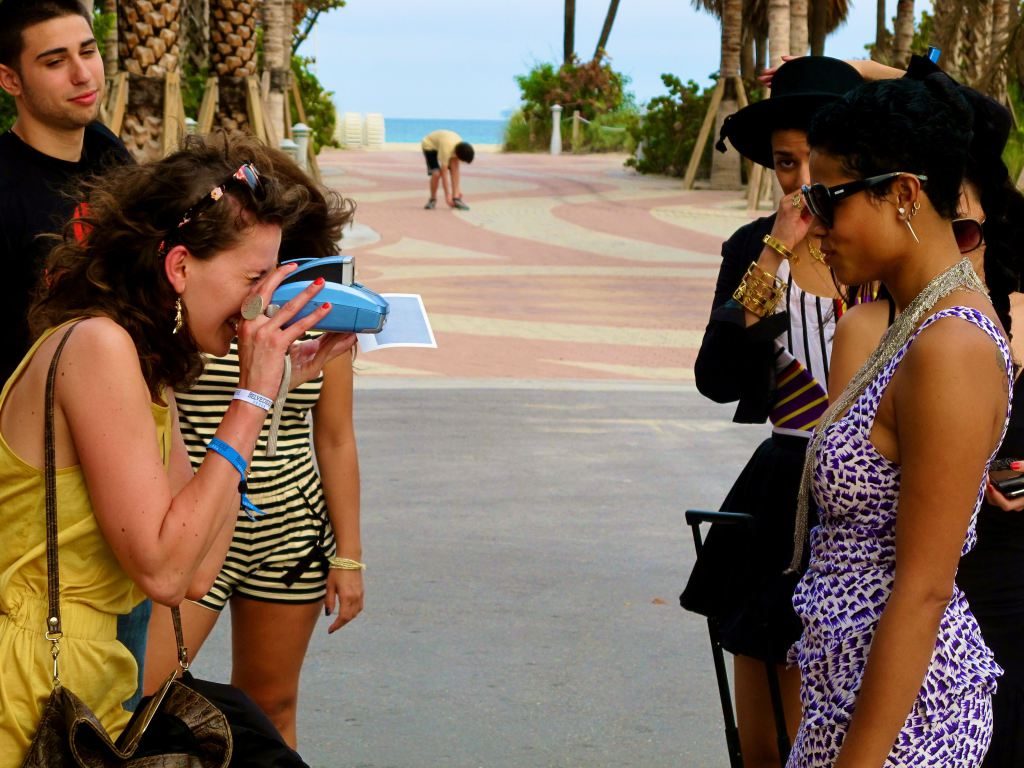 I thanked her for her cooperation, shook her hand, 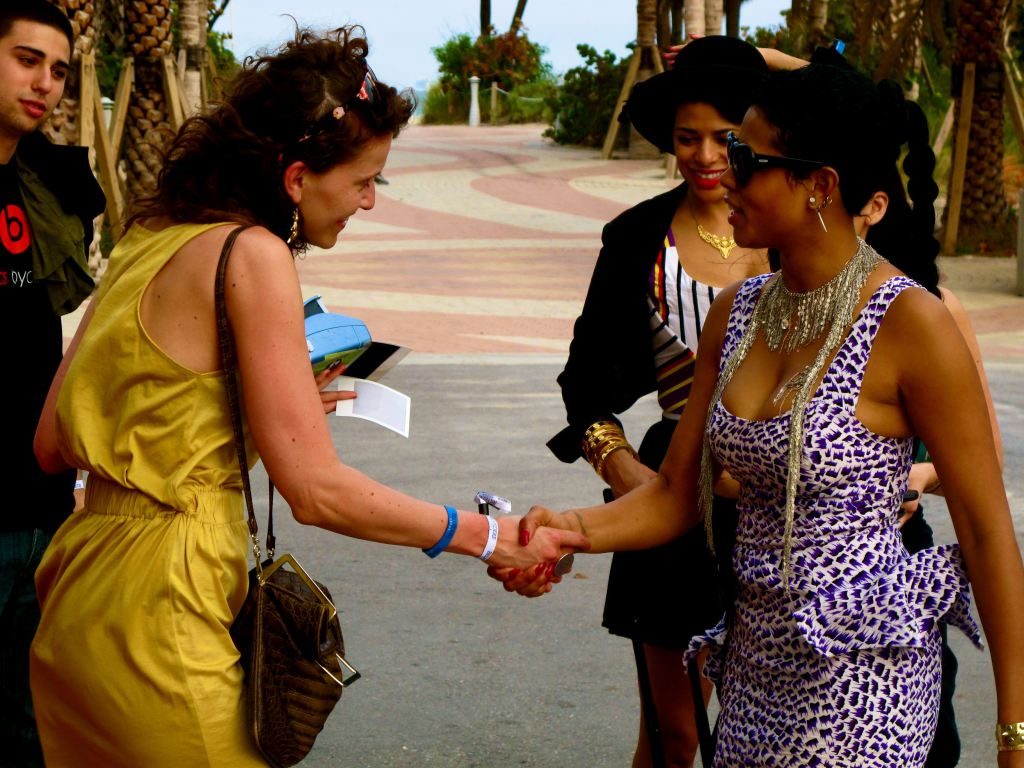 (yes I KNOW it looks like I’m shaking the hand of Michelle Obama. stop laughing!! ) and off she went… Another Miami Mission accomplished.

To come back to the dance train a lot of artists jump on… I try to understand it, but I’m from Belgium, Europe, where dance is King and we have that stuff coming out of our ears and mouth for years and years. Let’s see what the future has in store for Kelis, but I hope for her the album will be well received. For now beside the first Accapella song (video shot by RANKIN btw) there are two new leakes, and the ‘4th of July’ song is the one that is working the best for me. But who am I?

With the summer coming out and the world coming to its end, we all need a dance tune or two, don’t you think? 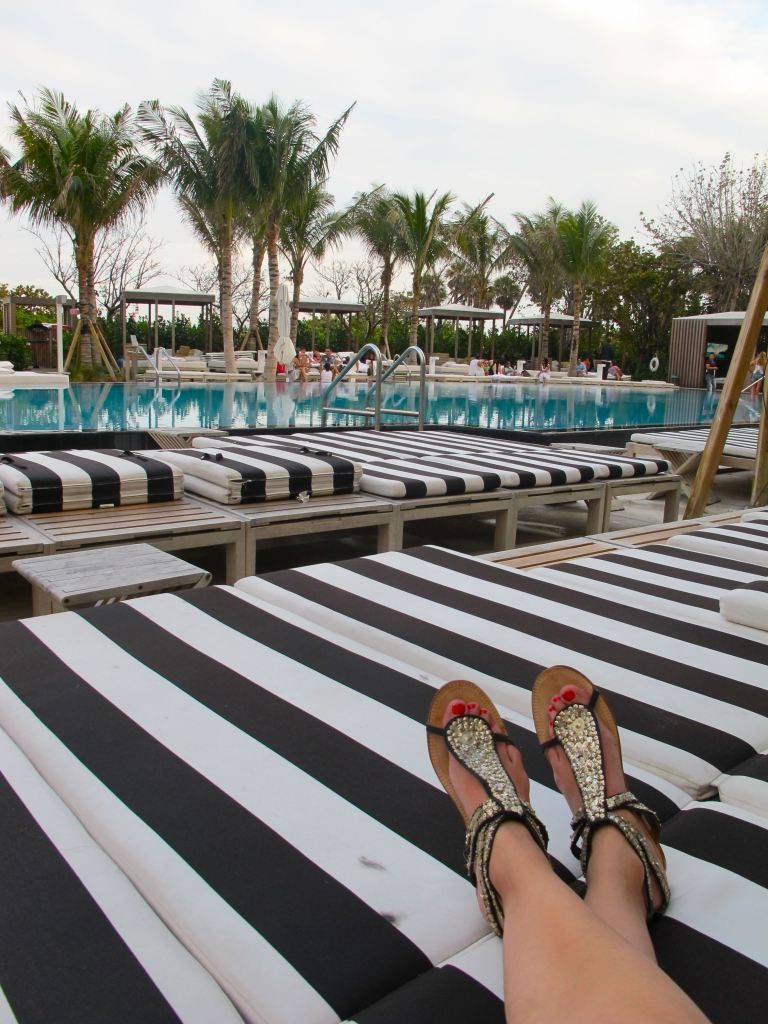 PS: Check out Kelis on Twitter and on IAmKelis.com for more info.

Special thanks to Johnny Kitsch, TLP and BOO for helping me out with this one. ❤

Leave a Reply to SS/10 #itsawrap « No Balls, No Glory; A Polaroid Story