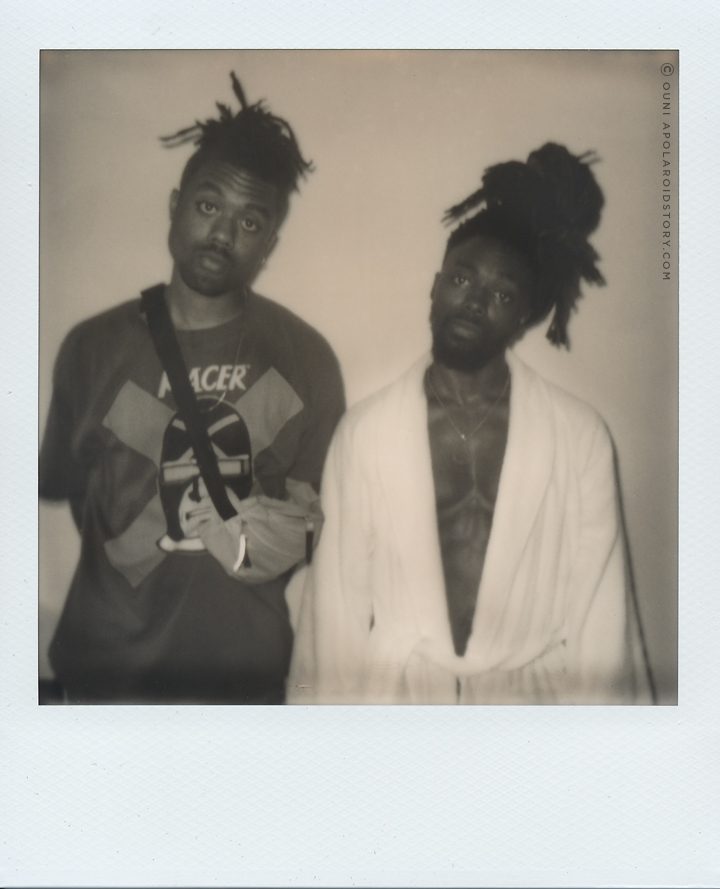 Super excited to share the following Polaroid interview feature with you all. Meet the eclectic duo behind EARTHGANG , two grown ass men straight out of Atlanta, Georgia ready to take over your musical spectrum with some truth bombs and southern healing vibrations. Not familiar with Johnny ‘Olu’ Venus and Doctur ‘Eian’ (The Artist Formerly Known as) Doc? Let me be so kind to introduce you to the ‘Simon & Garfunkel’ from Atlanta (but often compared to Dungeon Family and Outkast) real quick.

Starting out in highschool, EARTHGANG was founded somewhere in 2007. It took the boys a few years to craft their sound but their first body of work titled ‘Shallow Graves For Toys’ saw the light of day in 2013.  One of the lead singles of that album was ‘F-Bomb’ which was described as ‘a Giant Fuck You To All The HypeBeast Trendy Hoppers In HipHop’.  (Personal favorites of that album are UFO  and Machete btw)  In 2014 the boys embarked on an extensive tour experience supporting artists like DreamVille‘s BAS and TDE‘s AB-Soul and even teamed up touring with Mac Miller,  which gave them the opportunity to work on their stage presence and get familiar with the ins and outs of tour-life while expanding their fan base, leaving a strong impression every city they left behind. In 2015 the duo released two projects, one titled ‘Torba’ (check ‘Friday’ ) and another titled ‘Strays With Rabies’ (check Liquor Sto‘ and A.W.O.L)

Besides their main focus with EarthGang, the duo maintained a high productivity level, investing time into collaborative projects part of their ‘SPILLAGE VILLAGE’ collective – originally founded by Venus and Doc during their university years –  a group of individual artists consisting of J.I.D, 6Lack, Hollywood JB, JordxnBryant and (I presume) Mereba as main go-to female vocal addition. (You know like Tekitha was to Wu-Tang Clan.) This translated into an extensive body of work created over a time span of 3 years with 2014’s ‘Bears Like This’ (check ‘Cold Couch’ ) 2015’s ‘Bears Like This Too’ (check’Pussy On Repeat’ + ‘Duece Coupe’) and 2016’s ‘Bears Like This Too Much’. (check ‘VooDoo’ and  ‘M.O.M’)

After years of humble grinding, sculpting their sound, perfecting their flow, assembling a diverse musical repertoire and mastering their stage presence Venus and Doc found a home by signing to none other than J Cole his Dreamville label seeing their hard work and patience come to fruition. Straight after signing,  the duo released a triplette EP series, with RAGS (check ‘Meditate’) and ROBOTS (check ‘Artificial’) both released in 2017 and ROYALTY (check ‘Off The Lot’) as the final part of their trilogy released early 2018. Not long after that, EarthGang embarked on an American and European Tour supporting their fellow friend and Dreamville signee J.I.D. on his ‘Never Had Shit Tour’ in promotion of J.I.D’s his critically acclaimed Dreamville debut ‘The Never Story’.

EarthGang is currently gearing up for the release of their DreamVille major label debut album titled ‘MIRRORLAND’ allegedly due for release in 2018.

Ever landed on a speed date you didn’t plan to with two people at the same time? Me neither, but ….that is kinda what happend with me and EarthGang. LOL! If you have been following my work for a while, you know I take pride on research. When I look at other platforms, especially video interviews, I see a lot of interviews that go about anything but the music, about gossip, about who’s dating who, about who is beefing who and actual questions about the music or the specific album an artist releases is no longer ‘cool’ and ‘old-fashioned’ and ‘boring’ or even trivial in the conversation. Don’t get me wrong, I do watch and even appreciate some of that content flow but let’s be real, in this day and age, drama and sensation is where the easy clicks are going to, talking about the actual music takes too much attention span.  Well. I’m super stubborn so I always wanted to challenge the supposed fact that this new generation can’t watch anything longer than 7 minutes on the web so I never gave up my extensive features no matter what people said.  So when I found out my request for an J.I.D interview was approved I also found out that it was suggested if I could do an interview with J.I.D.’s opening act, EARTHGANG as well. What you have to understand is, that with every new feature I have the excuse to emerge myself completely in the body of work of an artist and I really take up on that excuse. I go through everything if not A LOT. It helps me with the questions I want to ask, it helps me understand their mindset, their sound, everything. Whenever I’m not in the position to do that, I feel like I’m going to swim naked in a busy swimming pool. (I was raised both Muslim as Christian and my Venus is in Virgo. I’m a prude, you feel me?) Just like I can’t have small talk in real life, I can’t ask gimmick questions in my interviews. I’m not Konbini with the easy ‘this or that?’ question snacks. (I love Konbini btw, just saying) So long story short, my research hours for J.I.D. were so extensive (I listen to everything that is out there, read as much interviews that are out there, watch as much video interviews that are out there, I try to drown into the specific artists their musical universe as much as my schedule allows me to) that there was barely anytime for a proper research for EarthGang since my interview with J.I.D. was approved very last-minute. Once I started going in to see what I could expect from EARTHGANG as artists, I understood really quickly that this was not just another opening act with a few songs here and there. While going through their extensive body of work, the content of their lyrics, the interviews I could find online, I noticed so much depth, so much context, so much thought-provoking lyrics, it freaked me out, because there was no time to go through their entire body of work as well. I decided that I would have to wing it with a few cliff-notes if I wanted to have any sleep, pray that I would not make a fool of myself and hope for the best outcome. Less than 5 minutes after my interview with J.I.D. the fellas from EARTHGANG walked in the room and I had to dive right in. I did tell the management that I had no problem doing an interview if the boys were open to having a conversation. This is an important fact, because, I have been doing this for a while now, and if you think that all artists are super talkative to platforms or journalists or bloggers that are not considered to be ‘important’  you are thoroughly mistaken. Researched questions help the conversation a lot better because the artist feels you put in time to go through their music which hopefully opens them up a bit, but I repeat, that is not a given. So when Doctur ‘Eian’ Dot walked in the room I told him honestly that I didn’t have the time to research properly and that I would wing the convo if that would be ok but that I hoped they would work a bit with me back to back style.  I don’t know why but at that moment Eian decided to be a disruptive cloud of thunder casting some shadows, which I professionally ignored. Not much later Johnny ‘Olu’ Venus walked in the room like a warm ray of light during a sweet Indian Summer (I know, that was a bit too poetic, but honestly that is really the energy he carries with him, my team concurs! )  a sheer contrast to his partner in crime. It was at that moment I decided I was going to focus all my attention to Eian to make him flip. I figured, there is already light in this room, I just need to open up the clouds a bit. Turns out, I embarked on one of my favorite winged conversational interviews I did so far in 2018 with two very inspiring, liberated, spiritual, intelligent free souls who channel their very essence right into the music they make. In the following video document you can follow our impromptu, back to back conversation about everything and nothing. About challenging the sound perception of Atlanta, mastering the art of stage presence and execution, moving as  ‘Indie HipHop Artists’ in today’s mainstream urban realm, the value of a long grind vs fast recognition and a constant conversation about the power of now and how that translates into the type of  music they make, the lyrical message they share, the experimental, electic southern musical production they come with and the creative disruptive energy they bring to the table.  I do hope you guys enjoy this passionate conversation as much as I did.

What I really like about EarthGang is the fact that they are 100% authentic. There are no  gimmicks, not in sound,  not in their personal style and not in their artist personas.  It’s organic individualism in a way I haven’t seen in a while in the realm of hip hop and rap where – objectively looking outside in –  many artists sound and look the same.  Besides that, musically they really complete each other in a very refreshing and avant-garde way. After the boys walked out the room I felt like I was hit by both Thunder and Lightning during a perfect storm. It’s rare for me to be so struck by artists besides their music. Over the years, the music fan in me became less naive, less worshipping and a lot more objective, a growth – that personally for me – improved my body of work. When I came home that night I started listening to so many EARTHGANG tracks (I’m still going through their entire repertoire as I type this) and I felt so stupid I slept on their music for so long, especially since I eat and breathe music half of my time. With every track I listened to I was like: Waw…I hàve to see these guys again and talk more in-depth about the music they make and the lyrical topics they hit. I’m so happy I had the opportunity to interview them – even though I walked into this conversation with basic research ammunition – because I truly believe they are both such a breath of fresh air in today’s hiphop realm. I hope this feature triggered you enough to catch up as feverishly to their music as I did. You know the feeling when you discover a new series that you really like and you have 3 seasons you can catch up on immediately? This is exactly what EARTHGANG did for me. On a personal note, their musical production and lyrical content had a very healing effect on me. You might understand what I mean once you go through their repertoire yourself.

EARTHGANG is gearing up for their debut DreamVille album release titled ‘MIRRORLAND’ allegedly due to be out later this year. With the pillars of J Cole’s DreamVille ,  I suspect 2019 might be a break-out year for these two very creative, spiritual individuals. Don’t sleep on them like I did, they are worth a spot in your playlist. But hey, I’m officially biased with these two now.

Ps: It was scorching hot that afternoon, and my cameras where suffering. From the 5 Polaroid cameras I took with me, 3 of them didn’t work for some reason, which resulted in a dozen failed single portrait polaroid shots of both J.ID, Venus & Doc. It is what it is. There is always next time. Que sera, sera.

Special thanks to Zekiel, Laura Mwanambuka, Jeremy D’Hamers and Universal Music Belgium for their contributions to this feature.