How to Bust a fort (k)Noxx

Posted by Elisabeth Ouni on Apr 29, 2009 in Stories, Uncategorized | No Comments 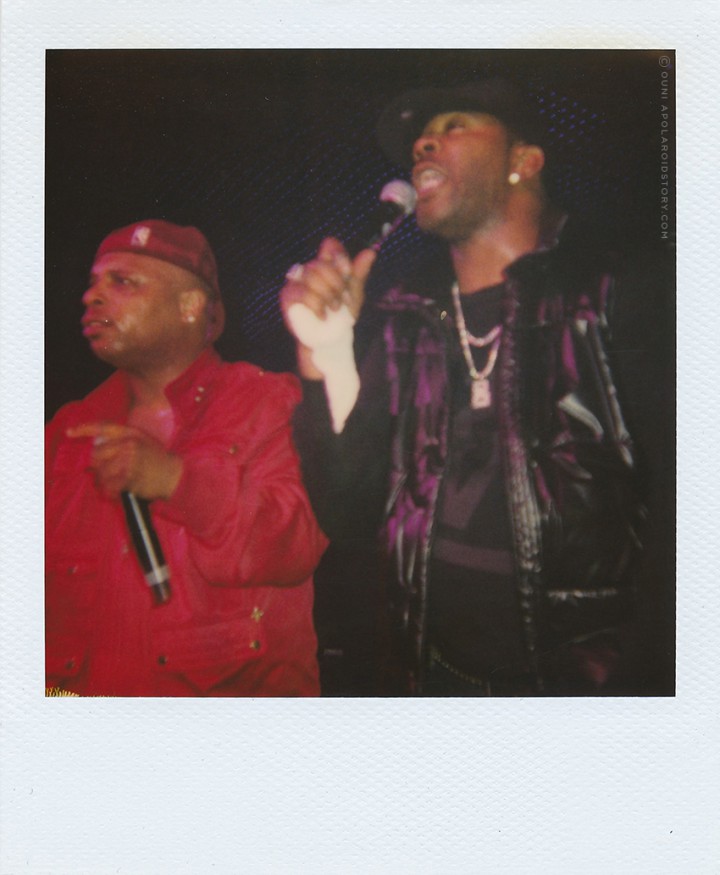 Busta Rhymes was coming to Antwerp, due to perform in a club called Noxx to promote his upcoming 8th album release for 19 May: Back on my B.S.

Busta Rhymes is the kind of artist I never imagined seeing in real life. I’ve been a fan since the day I saw the ‘Gimme Some More’ video. The colors, the abstract movements, the cartoon costumes, the fat beats and the fast, almost aggressive rhymes where so new to me. At that time, there was nothing you could compare it with, and I should know, since I was hooked on my MTV-screen for multiple hours a day.

When artists perform in venues I’m not familiar with, I always try and do some research about the venue, contact a few people… but if they perform in clubs, I tend not to, since I always guess and experience that club performances are more intimate and for this reason the artist is more approachable. I’ve never been to club Noxx for various reasons, but I’ve always wanted to go out there. So with Busta performing there, this was my perfect try-out.

Now, I immediately realized that I could not make the same mistake like I did that time with Snoop (D-O-double-G = N.O.P.E). I knew I had to dress accordingly, since the competition would possibly be fierce and some flat boots and a XL shirt would probably not help me backstage. You know, Pussy Galore and stuff. No, I needed to focus on booty, cleavage (read push-up bra), hot-pants and high heels. And so I did. When I left my house I felt almost naked, so I decided to cover myself up in a very long trench coat. I felt like an exhibitionist ready to scare some dudes in the park. Anyhow. Jules also decided to leave her beloved sneakers at home and come in high heel boots. And believe me, for Jules only the vision of high heels is enough to make her stomach turn. She is a true sneaker freak.

I arrived at Noxx around midnight. Now, about Noxx… I immediately felt it could not be compared to other clubs I’ve been to, and I might say, I’ve been around. Entering the club was already devided in WOMEN and MEN. Strange, I felt like I entered a club in Saoudi Arabia, but obviously this must have a reason. When I entered the actual club venue, I felt at ease. I was blending right in with the other girls. Hot, hotter, hot and flesh, more flesh sometimes a thong flash here or a nipple gate there. No need to feel uncomfortable at àll.

My relief was quickly followed by great concern. The club was humongous. We were right on time, since Busta Rhymes was scheduled to perform at 03h00. Well, add some delay and you easily can count 3H30 or 04h00. Jules and I quickly found the – tiny – stage. We saved us a spot and started waiting and observing. I noticed that the club had a separate VIP-area. We heard around and found out that you can be VIP on invitation or you could be VIP if you had enough money to be so. We are poor gals, and no way I’m paying to be VIP anyhow,  so we checked out if there was a possibility to sneak in.

Now, let me tell you something about Noxx. There is no ‘sneaking’ in that club whatsoever. I have never seen a club with so much security. I almost felt like I was in prison having a party with my fellow felons. This was a big problem, since charm and trained security simply does not work well together. That’s one. Two. I didn’t do any preparation to explain my project to somebody on the inside. Three. The venue was filling up and Jules and me were trapped in our little spot front stage. We knew we should be standing on the side of the stage close to the VIP but we were closed in and If we left that spot we were totally fucked. We ordered some dark rum and hoped that all would turn out just fine.

We waited. and waited. and waited. The club got fuller. and fuller. Ultimately packed. We noticed the entourage coming in. They entered via the VIP-area. Apparently the way to the backstage was behind the VIP area. We could not have been more wrong in choosing our spot. Trying to talk to them would be impossible since they were too far away, very protected, and even if we tried to get there after the concert, the time it would take us to get to the VIP-area was not enough since the club was packed and moving yourself in a vertical direction would be impossible.

A guy in a grey training with long dreads prepares the stage and instructs security to set a perimeter in the VIP-area so Busta Rhymes could make a fluent entrance. With all the movement the rest of the club starts to notice that something is coming up, so everybody slowly stopped dancing and started focusing, head directed to the stage. Tension is rising.

I already felt the pressure from a billion people in my back so I told Jules to focus and have my back, push back when necessary and use her elbows to keep some space for the both of us. Already I felt four different hands and arms from others behind me, trying to push me back from the stage in an attempt to get closer themselves. The DJ took his mic, and yelled in to the mic: “ANTWERP, ARE YOU READY? ARE YOU READY FOR BUSTA RHYMES?” Music starts, 1000 L.E.D lights lit up from the ceiling, I feel the bass trembling in my chest, Busta Rhymes entered the stage with Spliff Star and…. All hell broke loose. I repeat. ALL HELL BROKE LOOSE. The club went completely berserk. Nuts. Crazy. Wacko. All that shit.

Now Busta Rhymes’ music is mostly known as party music. You have to yell Woohaa Woohaa ,Break your neck, Put your hands where your eyes can see and give him some more. Pass the Courvoisier while spending Arab Money and If you give it to him, he will give it to you.

The combination Busta – Spliff star is both cool and funny. The big dude and the little man. They are visually a great combo and in their videos they always pull some comedian actor tricks out of their sleeves. They didn’t give the public much time to catch a breath, one hit song was quickly followed by the other. They both were sweating like horses, dipping their faces elegantly with little white towels. Like a king dips his face in a towel. But with a little attitude.

They moved real quickly and barely ever stood still for a minute. Great for the crowd, but I had work to do, since I already felt my options to get backstage were getting smaller and smaller. The track list was very quick so I didn’t hesitate and snapped one picture after the other in the hope that I would have some results. My Polaroid acted weird that night. It didnt focus very well. Sometimes she can be very difficult. Yes it a she. Ipola. 🙂

The whole performance is a blur to me. It was very very heavy. N.E.R.D. was heavy, but that were mostly girls. Having a bunch of hysteric male fans in your back, pushing, grabbing, punching etc. is not a pleasant gift on a Friday night around 04h00. Jules was completely squished against the stage, as well her as my stockings were ripped because of the rubbing against the stage. On stage there were two giant personal bodyguards and I swear, one was looking at us with big concern. I swear he felt sorry for us. But, we are big girls and we pushed back as hard as we could. Jules looked at me from time to time, and I could see in her eyes that she was having a hard time with the crowd behind her. I yelled at her to push back as hard as she could.

Now, imagine taking Polaroids with a hysteric crowd, two artists that move from one corner from the stage to the other, one combined with flashing lights and some stage extra’s like smoke and glitters that were shot in the air. Very… challenging.

We start to get a hang of it, so we quickly felt they noticed us. Both Busta as Spliff came to our direction more and more so I started hoping. We both knew the lyrics to a lot of his songs and that always helps, but what Busta did next I never expected. The intro of ‘The Wisper Song’ began and the crowd went nuts. Again. Now, that song has some profanity words, nothing I don’t know but hey. However, I didn’t expect that he would walk straight up to me, stood right before me and screamed into the microphone: “When you see my DICK, WHEN YOU SEE MY DICK, I’MA EAT YO PUSSY UP!” and pushed his rare front basically right in my face. Does it feel like I’m kidding? I’m not. Oh well, it’s an experience. I was a bit shocked, I admit. Busta Rhymes is a very big dude (with a belly btw) and it’s not like I have men’s rare fronts full frontal every day, right?

The gig was finished very quickly. I think he performed about 35 minutes which is very very short. The songs were all snip-its, so very short and fast from one to another. After finishing up with his latest song ‘Arab Money’ and closing the night with Fire it Up, he thanked the crowed, told them he would definitely come back to Belgium and left the stage with his entourage in his tail. Personally, I would love to see him in a real concert venue like the Ancienne Belgique. Not too big of a venue but big enough to get a whole crowd pumped up. Maybe longer than 30 minutes would be nice as well.

And that was that. No entourage talk. No hustling backstage. Nothing. Security set the VIP-area off again and there was no way in.

It was 05h00 and we were exhausted. I thought about the possibility of talking to some people, but since it was very late, I did not expect Busta to hang around long backstage, he would probably fresh up and leave the venue asap. By the time we would get in (or not get in) he would already be gone.

So, yet another failure. I was very disappointed. When I don’t succeed in something I have the tendency to go through all my ‘what-if’s. If after going through that list I can make the conclusion that I did every possible option to get what I want, I try not to blame myself. In this case, however, there were some what-if’s and I was not very happy with that. I learned to always come fully prepared, no exceptions. I left Fort Noxx sad. 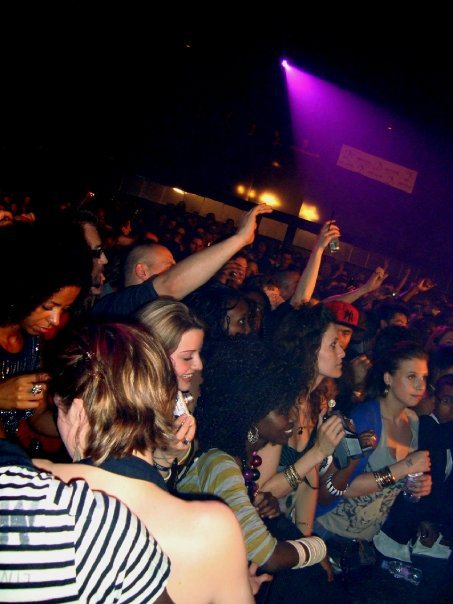