Heads will roll for Alain.

Posted by Elisabeth Ouni on Apr 5, 2010 in Stories, Uncategorized | No Comments

By now you all know I spent some time in Miami during WMC. By now most of you should have read this story. If you did, and you read it with your undivided attention, you might have noticed I referred to an encounter I had on the street with a certain someone… Well above you can see the result from my ‘close encounter with the cute kind’

This is the story. (I was struggling with the following titles btw: The A-Trak Attack – Doing An Accidental Alain.)

I was on my way walking the streets of Miami South Beach, heading for an exclusive party with Gilles Peterson & Questlove in The Delano Hotel. (Yes, that hotel that is too expensive for you, me and 90% of the rest of the world.) I was already a bit nervous since I really set my mind on hearing some good music and having a great party which was harder to find in Miami than you might expect, and I heard through the grapevine that getting in was going to be challenging to say the least.

Anyhow. I was simply walking the streets while having a conversation with my friend, while all of a sudden I see a couple of meters before me 2 guys walking on the street. Two random guys. walking. the streets. This is where things get freaky. For some mentally ill reason (I seem to experience those a lot lately) I just KNEW that the man walking in front of me with a little black hat on his head, a black leather jacket, jeans and sneakers was ALAIN MACKLOVITCH better known as Dj,  5 times world champ turntablist, Kanye confidant, co-Founder of FOOL’S GOLD label and remix king of the 2009 smasherhit Yeah Yeah Yeah’s ‘Heads Will Roll’: A-TRAK.

So all of a sudden I interrupted my friend in his story, grabbed him by the arm and urged him to walk faster and pass all the people in front of me that were in between me and the man who was supposed to be A-Trak. I whispered to my friend that I had serious suspicions that the man in front of me was A-Trak and was considering an instant Polaroid attack. “Who?” my friend asked me, looking at me like I completely lost my mind, while he was trying to keep up my rapid pace. I told him that I was completely shocked with myself , for I was experiencing these rad suspicions and that I was having serious doubts about them,  mainly because of the fact  that I could not figure out how on éarth it could be possible to recognize an individual from the back, especially If you have never seen that same individual in real life. For all I know, I don’t have an A-TRAK shrine in my bedroom so I was really struggling with the message my instincts or rather my internal demons were whispering in my head.

I was almost crawling behind him, trying to get a profile glimpse but there were too many people on the sidewalk, walking me by. If you could add a music score to the situation this one might fit the bill. For a minute I felt like Emmanuele Bèart in Mission Impossible. (If I have to be a spy, I at least want to be a gorgeous one) I told my friend that I was too chickened to walk up and pat the man on the shoulder because what will I say or do if it’s not the man I thought he was?? I hardly walk up to men I don’t know in a club, bar or restaurant, let a lone would I randomly speak to one on the streets. Besides the signature hat, there were no clear indications that this man was A-Trak.

And then, my instincts were proven to be right because while I was shadowing the man (I can NOT believe I’m actually writing the word ‘shadowing’) he turned around, and smashed a sticker with the palm of his hand against a parking lot machine. A split second later I passed the parking lot machine, took a detective look at the sticker, discovered that it was a cartoon DUCK with records in his hands and then I knew for sure. The man with the black hat at 12 O clock flaunting some nice sneakers was in fact A-Trak. The duck represents DUCK SAUCE, the collaboration A-trak has with Armand Van Helden and the lovely track aNYway

I realised I had to react fast before I lost him from under my ouni-radar, whispered to my friend: ‘It’s him, it’s on!’ started to run (?!) against the stream of people walking on the sidewalk  and finally managed to walk right behind him to tap him gently on the right shoulder. By that time my friend did not realise that I had this revelation and all he witnessed  was what he later explained as one of ‘nature great events’ called:  The Ouni Hunt best compared with the following:

I officially state that I never bit, scratched, shred, licked or jumped, ALAIN MACKLOVITCH aka A-Trak nor did any living creature got harmed and/or killed during the current events.

He turned around, and this is what happened:

“Hi, I’m sorry to disturb you in the middle of the street like this, but are you the man formerly known as A-TRAK?”

“Yes, a duck…” (while showing me the duck sticker)

I swear to god, why do I always have bizarre intro-conversations? Why don’t I do right, like some other girls do? Jessica Rabbit would NOT be happy with this. (Thank god, I was heading for a fancy party, and I was wearing a dress and not looking shabby) He gave me the sticker and I asked him if he felt like posing for a Polaroid picture.

“Sure” he said. I gently grabbed his arm (I really did that) and dragged him to a near parking lot, and explained him I really liked nice clean walls for this so we needed to look for one. He looked at me like I just told him that UFO’s were coming and I was the only person on the planet that could save him from extraterrestrials experimenting on his brain, in order to study the art of scratching.

He didn’t really know what was going on, and his friend was laughing with the whole odd situation. I placed him against this nice psychedelic metallic hotel porch. 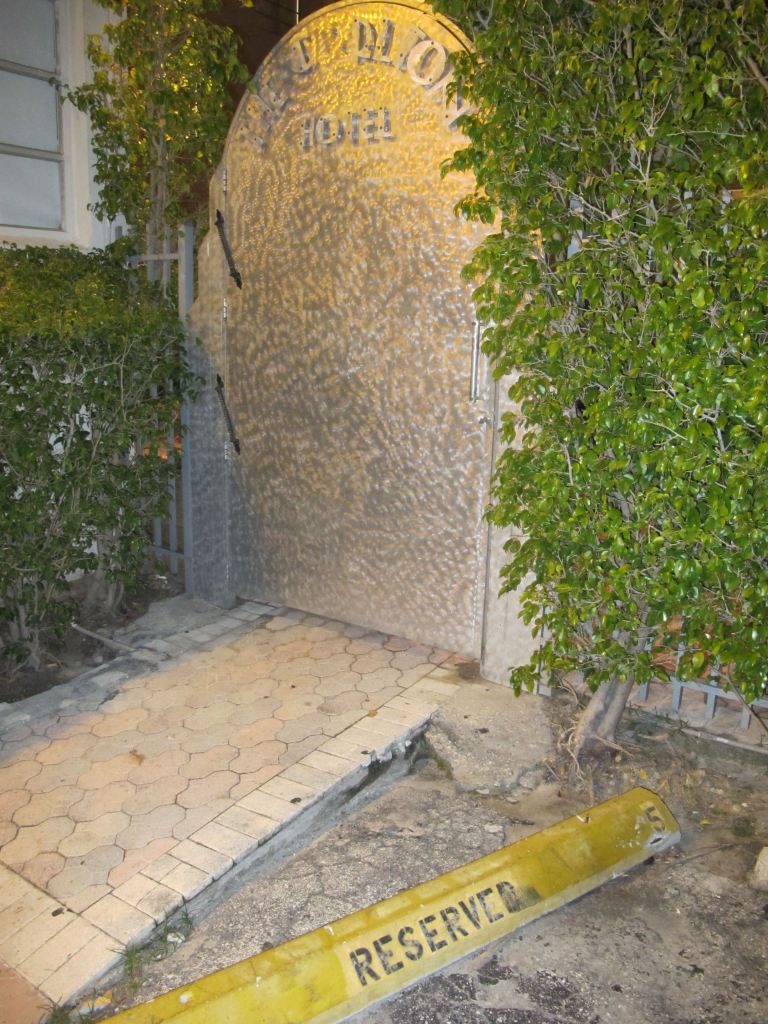 Until then I didn’t have the time to explain him that I had a blog, nor the concept of the blog so for him having the 11PM demand of posing for a complete stranger who took him in a dark corner of a small parking lot was a bit strange, which is completely understandable. I was feeling very uncomfortable myself, realising that the whole situation was just totally whack and I would never éver do that type of shit if  I would not have this blog and a sudden eruption of paparazzi guilt and shy-ness was flowing all over me.

To break the ice I told him I was a fan, or maybe ‘fan’ was not the right word, but still a fan, but not that kinda ‘fan’. After bursting out these very inconsistent words I was ready to dig a hole in the ground and hide in it. He nodded with a little smile and was probably now convinced that I was in fact a lunatic. I told him that he was completely free in giving me a signature pose while I straightened his jacket a little bit. He was looking at his friend with a ‘WTF is going on’ look in his eyes, who was cracked up with the whole situation and asked me: “Should I call for Hair & Make-up or something?” while he bursted out laughing. 🙂 I turned around, aimed my Polaroid and said: “No, he is looking just fine the way he is” and did my countdown.

Then, finally, I showed him the other artists on my iTouch while my voice, body and hands were shaking. Yes. Again. Since I had no time for being nervous befòre I took the picture – which is normally the case – the adrenaline of the hunt was pumping through my veines which resulted in heavy trembling. Again. Not Sexy. not Jessica Rabbit whatsoever.

I thanked him for his cooperation, apologised for the random street attack, shook his hand and let hem back loose on the streets. The situation described above occurred in a time span of approximately 5 minutes maximum. I was standing on the parking lot with my friend BOO processing the past events while I was stìll trembling. Damn Adrenaline. Does that make me crazy?

PS: Follow A-trak on twitter and be on the look-out for a full A-Trak album in the near future…